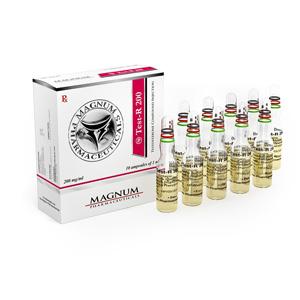 Magnum Test-R 200 is not the only testosterone mixture on the market; there are actually quite a few with Omnadren and Testoviron being the two most prominent besides that of Sust. Generally everything that can be said of Magnum Test-R 200 can be said of Omnadren as they are almost identical in every way and while Testoviron is simply a mixture of Testosterone-Enanthate and Testosterone-Propionate made by Schering (Not to be confused with Testoviron Depot, an Enanthate only form) there is something you need to understand. Of all testosterones and testosterone forms, testosterone mixtures are by-in-large the most commonly counterfeited on the black market. The demand for such mixtures is often high because certain labs prey on the ignorance of others; many believe a testosterone mixture is more powerful than a single-ester form when as you understand mixing various forms together does not change the active hormone. Understand, testosterone is simply testosterone regardless of the form and regardless of how many forms you couple together.

500 mg/week is a minimal dosage level for most to see good results. At this dosage, gains are typically good for a first cycle and often no ancillary drug is required to control estrogen. But in many instances, estrogen control is already desirable.

Being a strong androgen, we can expect the typical side effects. This includes oily skin, acne body/facial hair growth and premature balding. The addition of Proscar/Propecia should be able to minimize such side effects, as it will limit the conversion of testosterone to DHT (dihydrotestosterone). Magnum Test-R 200 will also suppress natural testosterone production rather quickly. The use of HCG and/or Clomid/Nolvadex are necessary at the conclusion of a cycle in order to avoid a hormonal crash. Remember though, Magnum Test-R 200 will remain active in the body for up to a month after your last injection was given. Beginning you post cycle drug therapy immediately after the steroid has been discontinued will not be very effective. Instead, HCG or Clomid/Nolvadex should be delayed three weeks, until you are near the point where blood androgen levels have dropped significantly.